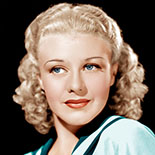 Ginger Rogers (born Virginia Katherine McMath; July 16, 1911 – April 25, 1995) was an American actress, dancer and singer who appeared in films, and on stage, radio, and television throughout much of the 20th century.

During her long career, she made 73 films, collaborating with Fred Astaire as a romantic lead actress and dancing partner in a series of ten Hollywood musical films that revolutionized the genre. She achieved great success on her own in a variety of film roles and won the Academy Award for Best Actress for her performance in Kitty Foyle (1940). She ranks #14 on the AFI’s 100 Years…100 Stars list of actress screen legends.