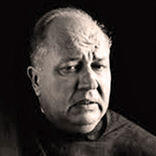 Theodore Roethke (May 25, 1908 – August 1, 1963) was an American poet, who published several volumes of influential and critically successful verse.

He is widely regarded as among the most accomplished and influential poets of his generation.

His first book, Open House (1941), took ten years to write and was critically acclaimed upon its publication. He went on to publish sparingly but his reputation grew with each new collection, including The Waking which was awarded the Pulitzer Prize in 1954.

IN A DARK TIME
Theodore Roethke

In a dark time, the eye begins to see,
I meet my shadow in the deepening shade;
I hear my echo in the echoing wood—
A lord of nature weeping to a tree,
I live between the heron and the wren,
Beasts of the hill and serpents of the den.

What’s madness but nobility of soul
At odds with circumstance? The day’s on fire!
I know the purity of pure despair,
My shadow pinned against a sweating wall,
That place among the rocks—is it a cave,
Or winding path? The edge is what I have.

A steady storm of correspondences!
A night flowing with birds, a ragged moon,
And in broad day the midnight come again!
A man goes far to find out what he is—
Death of the self in a long, tearless night,
All natural shapes blazing unnatural light.

Dark, dark my light, and darker my desire.
My soul, like some heat-maddened summer fly,
Keeps buzzing at the sill. Which I is I?
A fallen man, I climb out of my fear.
The mind enters itself, and God the mind,
And one is One, free in the tearing wind.

IT WAS BEGINNING WINTERTheodore Roethke

The light moved slowly over the frozen field, Over the dry seed-crowns, The beautiful surviving bones Swinging in the wind.

Light traveled over the wide field; Stayed. The weeds stopped swinging. The mind moved, not alone, Through the clear air, in the silence.

A lively understandable spirit Once entertained you. It will come again. Be still. Wait.