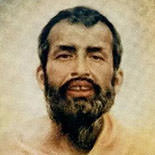 Ramakrishna (February 18, 1836 – August 16, 1886), born Gadadhar Chattopadhyay, was a famous mystic of 19th-century India. His religious school of thought led to the formation of the Ramakrishna Mission by his chief disciple Swami Vivekananda. He is also referred to as “Paramahamsa” by his devotees, as such he is popularly known as Ramakrishna Paramahamsa.

Ramakrishna was born in a poor Brahmin Vaishnava family in rural Bengal. He became a priest of the Dakshineswar Kali Temple, dedicated to the goddess Kali, which had the influence of the main strands of Bengali bhakti tradition. The most widely known amongst his first spiritual teachers was an ascetic woman, called Bhairavi Brahmani, who was skilled in Tantra and Vaishnava bhakti. Later an Advaita Vedantin ascetic taught him non-dual meditation, and according to Ramakrishna, he experienced nirvikalpa samadhi under his guidance. Ramakrishna also practised other religions, notably Islam and Christianity, and said that all religions lead to the same God.

Ramakrishna looked upon the world as Maya and he explained that avidya maya represents dark forces of creation (e.g. sensual desire,selfish actions, evil passions, greed, lust and cruelty), which keep people on lower planes of consciousness. These forces are responsible for human entrapment in the cycle of birth and death, and they must be fought and vanquished. Vidya maya, on the other hand, represents higher forces of creation (e.g. spiritual virtues, selfless action, enlightening qualities, kindness, purity, love, and devotion), which elevate human beings to the higher planes of consciousness.

Ramakrishna practiced several religions, including Islam and Christianity, and taught that in spite of the differences, all religions are valid and true and they lead to the same ultimate goal—God. Ramakrishna’s taught that jatra jiv tatra Shiv (wherever there is a living being, there is Shiva). His teaching, “Jive daya noy, Shiv gyane jiv seba” (not kindness to living beings, but serving the living being as Shiva Himself) is considered as the inspiration for the philanthropic work carried out by his chief disciple Vivekananda.