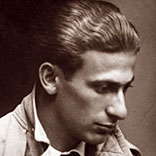 Radnóti was born in Budapest into an assimilated Jewish family. His life was considerably shaped by the fact that both his mother and his twin brother died at his birth. He refers to this trauma in the title of his compilation Ikrek hava (“Month of Gemini”/”Month of the Twins”).

Radnóti converted to Catholicism in 1943. This was not prompted by the persecution of the Hungarian Jews from which converts to Christianity were initially exempted, for Radnóti consciously did so at a time when he could have no more advantage of his conversion. The reason was rather his long-standing fascination with Catholicism and his admiration to his former professor of literature, the Piarist priest Sándor Sík.

AND SO WILL I WONDER?Miklos Radnoti

I lived, but then in living I was feeble in life and
always knew that they would bury me here in the end,
that year piles upon year, clod on clod, stone on stone,
that the body swells and in the cool, maggot-
infested darkness, the naked bone will shiver.
That above, scuttling time is rummaging through my poems
and that I will sink deeper into the ground.
All this I knew. But tell me, the work–did that live on?

The moon sways on a foamy sky,
I am amazed that I live.
An overzealous death searches this age
and those it discovers are all so very pale.

The forest bled and in the spinning
time blood flowed from every hour.
Large and looming numbers were
scribbled by the wind onto the snow.

I lived to see that and this,
the air feels heavy to me.
A war sound-filled silence hugs me
as before my nativity.

I stop here at the foot of a tree,
its crown swaying angrily.
A branch reaches down — to grab my neck?
I’m not a coward, nor am I weak,

just tired. I listen. And the frightened
branch explores my hair.
To forget would be best, but I have
never forgotten anything yet.

Foam pours over the moon and the poison
draws a dark green line on the horizon.

I roll myself a cigarette
slowly, carefully. I live.