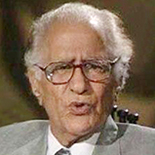 Qasmi wrote 50 books on topics such as poetry, fiction, criticism, journalism and art, and was a major figure in contemporary Urdu literature. He was also editor and publisher of the literary magazine Funoon for almost half a century. He received awards such as the Pride of Performance in 1968 and Sitara-e-Imtiaz in 1980 for his literary work.

over my sizzling body
someone sprinkles dew
from His invisible height
it seems, calling out my name