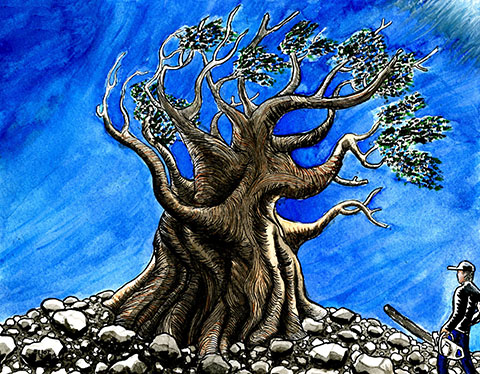 Prometheus (recorded as WPN-114) was the oldest known non-clonal organism, a Great Basin bristlecone pine (Pinus longaeva) tree growing near the tree line on Wheeler Peak in eastern Nevada, United States. The tree, which was at least 4862 years old and possibly more than 5000, was cut down in 1964 by a graduate student and United States Forest Service personnel for research purposes. The people involved did not know of its world-record age before the cutting (see below), but the circumstances and decision-making process remain controversial; not all the facts are agreed upon by all involved.

The tree’s name refers to the mythological figure Prometheus, who stole fire from the gods and gave it to man. The designation WPN-114 was given by the original researcher, Donald Rusk Currey, and means it was the 114th tree he sampled in his research in Nevada’s White Pine County.