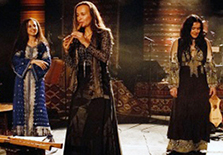 There are three types of Sephardic songs—topical and entertainment songs, romance songs and spiritual or ceremonial songs. Lyrics can be in several languages, including Hebrew for religious songs, and Ladino.

Songs which are song by women are traditionally sung while performing household tasks, without accompaniment or harmony. Tambourines and other percussion instruments are sometimes used, especially in wedding songs. Oud and qanún are also used in some instrumentations of Sephardic music, and more modern performers incorporate countless other imported instruments.

Sephardic music has its roots in the musical traditions of the Jewish communities in medieval Spain. Since then, it has picked up influences from Morocco, Argentina, Turkey, Greece, and the other places that Spanish Jews settled after their expulsion from Spain in 1492. Lyrics were preserved by communities formed by the Jews expelled from the Iberian Peninsula. These Sephardic communities share many of the same lyrics and poems, but the music itself varies considerably.