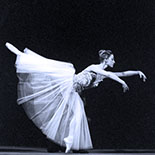 Plisetskaya studied ballet from age nine and first performed at the Bolshoi Theater when she was eleven. She joined the Bolshoi Ballet company when she was eighteen, quickly rising to become their leading soloist. Her early years were also marked by political repression, however, partly because her family was Jewish. She was not allowed to tour outside the country for sixteen years after joining the Bolshoi. During those years, her fame as a national ballerina was used to project the Soviet Union’s achievements during the Cold War. Premier Nikita Khrushchev, who lifted her travel ban in 1959, considered her “not only the best ballerina in the Soviet Union, but the best in the world.”