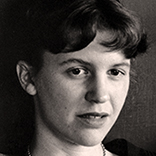 Plath married fellow poet Ted Hughes in 1956 and they lived together first in the United States and then England, having two children together, Frieda and Nicholas. Plath suffered from depression for much of her adult life, and in 1963 she committed suicide. Controversy continues to surround the events of her life and death, as well as her writing and legacy.

Plath is credited with advancing the genre of confessional poetry and is best known for her two published collections, The Colossus and Other Poems and Ariel. In 1982, she won a Pulitzer Prize posthumously, for The Collected Poems. She also wrote The Bell Jar, a semi-autobiographical novel published shortly before her death.

The wait’s begun again,The long wait for the angel,For that rare, random descent.

A garden of mouthings. Purple, scarlet-speckled, black
The great corollas dilate, peeling back their silks.
Their musk encroaches, circle after circle,
A well of scents almost too dense to breathe in.
Hieratical in your frock coat, maestro of the bees,
You move among the many-breasted hives,

My heart under your foot, sister of a stone.

Trumpet-throats open to the beaks of birds.
The Golden Rain Tree drips its powders down.
In these little boudoirs streaked with orange and red
The anthers nod their heads, potent as kings
To father dynasties. The air is rich.
Here is a queenship no mother can contest—

In burrows narrow as a finger, solitary bees
Keep house among the grasses. Kneeling down
I set my eyes to a hole-mouth and meet an eye
Round, green, disconsolate as a tear.
Father, bridegroom, in this Easter egg
Under the coronal of sugar roses

The queen bee marries the winter of your year.