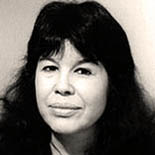 Marge Piercy (born March 31, 1936) is an American poet, novelist, and social activist. She is the author of the New York Times bestseller Gone to Soldiers, a sweeping historical novel set during World War II.

As of 2004 she is author of seventeen volumes of poems, among them The Moon is Always Female (1980, considered a feminist classic) and The Art of Blessing the Day (1999), as well as fifteen novels, one play (The Last White Class, co-authored with her third and current husband Ira Wood), one collection of essays (Parti-colored Blocks for a Quilt), one nonfiction book, and one memoir.

ECLIPSE AT THE SOLSTICE
Marge Pierce

New moon and the hottest sun:
It should be the day of the triumphant
sun marching like a red elephant
up the lapis arch of sky.

The moon is invisible, shy,
almost wounded. She draws
the thin short darkness around her
like a torn dress.

Then in the fat of the afternoon
she slides over the sun
enveloping him. I have
conquered, she croons,

brought darkness and put the birds
to sleep, raised the twilight wind.
But then his corona shines
around her and she sees.

You really are a lion with mane
of white, you beauty. So
she gives him the day back,
slowly, and lets him roar.

We sat across the table.
he said, cut off your hands.
they are always poking at things.
they might touch me.
I said yes.

Food grew cold on the table.
he said, burn your body.
it is not clean and smells like sex.
it rubs my mind sore.
I said yes.

I love you, I said.
That’s very nice, he said
I like to be loved,
that makes me happy.
Have you cut off your hands yet?