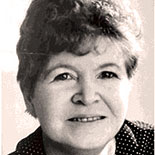 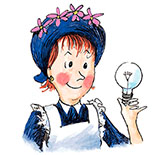 The series was continued after her sudden death from an aneurysm by her nephew Herman Parish. Parish was born in Manning, South Carolina, attended the University of South Carolina, and received a Bachelor of Arts degree in English.

Amelia Bedelia is a “Simple John” character, based on cracker-barrel punning humour and folklore. She works as a household cook and occasional servant. She uses no recipes, but, by intuitively combining a little bit of this and a little bit of that, her cakes and cookies and meals are always delicious. She is such a good cook that her employers cannot fire her, despite the disastrous way she misinterprets their instructions: prune the shrubs, scale and ice the fish, file the letters, run over the tablecloth with an iron, shorten these dresses, serve coffee with porridge, heat a can of soup, and so on. Amelia Bedelia is extremely literal-minded. The author’s word-play, and Amelia Bedelia’s fundamental goodness and childlike simplicity appeal to youngsters who are beginning to see and enjoy more than one meaning in a word or a phrase. Herman honored Peggy’s life in his book, Good Driving, Amelia Bedelia, by writing in its dedication: “For Peggy Parish, the real Amelia.”