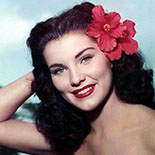 Debra Paget (born August 19, 1933) is an American actress and entertainer.

Paget rose to prominence in the 1950s and early 1960s in a variety of feature films, including 20th Century Fox’s epic Demetrius and the Gladiators, starring Victor Mature, Jay Robinson and Susan Hayward, a sequel to The Robe. She also appeared in Love Me Tender, the film début of Elvis Presley.