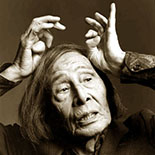 Kazuo Ohno (October 27, 1906 – June 1, 2010) was a Japanese dancer who became a guru and inspirational figure in the dance form known as Butoh. It was written of him that his very presence was an “artistic fact.”

He is the author of several books on Butoh, including The Palace Soars through the Sky, Dessin, Words of Workshop, and Food for the Soul. The latter two were published in English as Kazuo Ohno’s World: From Without & Within (2004).

Ohno once said of his work: “The best thing someone can say to me is that while watching my performance they began to cry. It is not important to understand what I am doing; perhaps it is better if they don’t understand, but just respond to the dance.”