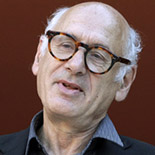 Nyman is known for numerous film scores (many written during his lengthy collaboration with the filmmaker Peter Greenaway), and his multi-platinum soundtrack album to Jane Campion’s The Piano. He has additionally written a number of operas, including The Man Who Mistook His Wife for a Hat, Letters, Riddles and Writs, Noises, Sounds & Sweet Airs, Facing Goya, Man and Boy: Dada, Love Counts, and Sparkie: Cage and Beyond, and he has written six concerti, four string quartets, and many other chamber works, many for his Michael Nyman Band, with and without whom he tours as a performing pianist. Nyman stated that he prefers to write opera rather than other sorts of music.