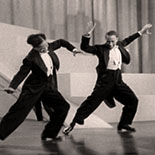 Fayard was inducted into the National Museum of Dance C.V. Whitney Hall of Fame in 2001, along with his brother Harold Nicholas.