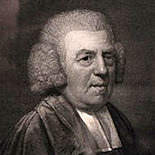 Starting his career at sea, at a young age, he became involved with the slave trade for a few years, and was himself enslaved for a period.

After experiencing a religious conversion, he became a minister, hymn-writer, and later a prominent supporter of the abolition of slavery. He was the author of many hymns, including “Amazing Grace” and “Glorious Things of Thee are Spoken.”

Newton’s lyrics have become a favorite for Christians, largely because the hymn vividly and briefly sums up the doctrine of divine grace. The lyrics are based on 1 Chronicles 17:16-17, a prayer of King David in which he marvels at God’s choosing him and his house. Newton apparently wrote this for use in a sermon he preached on this passage on New Year’s Day 1773, and for which he left his sermon notes, which correspond to the flow of the lyrics. The song has also become known as a favorite with supporters of freedom and human rights, both Christian and non-Christian, in part because many assume it to be Newton’s testimony about his slave trading past.

Amazing Grace, how sweet the sound,
That saved a wretch like me.
I once was lost but now am found,
Was blind, but now I see.

T’was Grace that taught my heart to fear.
And Grace, my fears relieved.
How precious did that Grace appear
The hour I first believed.

Through many dangers, toils and snares
I have already come;
‘Tis Grace that brought me safe thus far
and Grace will lead me home.

The Lord has promised good to me.
His word my hope secures.
He will my shield and portion be,
As long as life endures.

Yea, when this flesh and heart shall fail,
And mortal life shall cease,
I shall possess within the veil,
A life of joy and peace.

When we’ve been here ten thousand years
Bright shining as the sun.
We’ve no less days to sing God’s praise
Than when we’ve first begun.

Amazing Grace, how sweet the sound,
That saved a wretch like me.
I once was lost but now am found,
Was blind, but now I see.