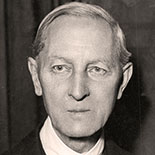 He also had a very powerful role as a government adviser, particularly on Irish issues and with regard to the study of English in England. He is perhaps best remembered for his poem “Vitaï Lampada”.

THE SUFI IN THE CITYHenry Newbolt

When late I watched the arrows of the sleet
Against the windows of the Tavern beat,
I heard a Rose that murmured from her Pot:
‘Why trudge thy fellows yonder in the Street?

‘Before the phantom of False Morning dies,
Choked in the bitter Net that binds the skies,
Their feet, bemired with Yesterday, set out
For the dark alleys where To-morrow lies.

‘Think you, when all their petals they have bruised,
And all the fragrances of Life confused,
That Night with sweeter rest will comfort these
Than us, who still within the Garden mused?

‘Think you the Gold they fight for all day long
Is worth the frugal Peace their clamours wrong?
Their Titles, and the Name they toil to build—
Will they outlast the echoes of our Song?’

O Sons of Omar, what shall be the close
Seek not to know, for no man living knows:
But while within your hands the Wine is set
Drink ye–to Omar and the Dreaming Rose!

There’s a breathless hush in the Close to-night —
Ten to make and the match to win —
A bumping pitch and a blinding light,
An hour to play and the last man in.
And it’s not for the sake of a ribboned coat,
Or the selfish hope of a season’s fame,
But his Captain’s hand on his shoulder smote
“Play up! play up! and play the game!”

The sand of the desert is sodden red, —
Red with the wreck of a square that broke; —
The Gatling’s jammed and the colonel dead,
And the regiment blind with dust and smoke.
The river of death has brimmed his banks,
And England’s far, and Honour a name,
But the voice of schoolboy rallies the ranks,
“Play up! play up! and play the game!”

This is the word that year by year
While in her place the School is set
Every one of her sons must hear,
And none that hears it dare forget.
This they all with a joyful mind
Bear through life like a torch in flame,
And falling fling to the host behind —
“Play up! play up! and play the game!”