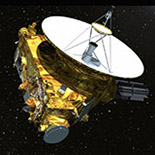 New Horizons is a space probe launched by NASA on January 19, 2006 to study the dwarf planet Pluto and the Kuiper belt. It is expected to be the first spacecraft to fly by and study Pluto and its moons, Charon, Nix, Hydra, Kerberos, and Styx, with an estimated arrival date at the Pluto–Charon system of July 14, 2015. As of December 11, 2013, its distance from Pluto is about 4.62 AU (about 28.95 AU from Earth), with radio signals taking 4 hours to travel to the spacecraft from Earth (an 8 hour round trip).

Launched directly into an Earth-and-solar-escape trajectory with an Earth-relative velocity of about 16.26 km/s (58,536 km/h; 36,373 mph) it set the record for the highest velocity of a human-made object from Earth. Using a combination of monopropellant and gravity assist, it flew by the orbit of Mars on April 7, 2006, Jupiter on February 28, 2007, the orbit of Saturn on June 8, 2008; and the orbit of Uranus on March 18, 2011. Its secondary mission is to fly by one or more other Kuiper belt objects (should a suitable target be available) then the heliosphere. It is expected to become the fifth interstellar probe and second fastest in the history of space exploration.