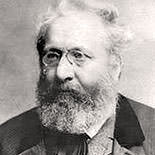 Jan Nepomuk Neruda (July 9, 1834 – August 22, 1891) was a Czech journalist, writer and poet, one of the most prominent representatives of Czech Realism and a member of “the May school”.

Frogs sat around a puddle
And gazed at heavens high
Frog teacher pounding into skulls
The science of the sky.

He spoke about the heavens
Bright dots we see there burning
And men watch them, ‘astronomers’
Like moles they dig for learning.

When these moles start to map the stars
The large becomes quite small
What’s twenty million miles to us
They call one foot, that’s all.

So, as those moles did figure out
(If you believe their plan)
Neptune is thirty feet away
Venus, less than one.

If we chopped up the Sun, he said
(Awed frogs could only stare)
We’d get three hundred thousand Earth’s
With still a few to spare

The Sun helps us make use of time,
It rolls round heaven’s sphere
And cuts a workday into shifts
‘Forever’ to a year

They are no evil sign, we hope
No reason for great fright
As in a story we got from
Lubyenyetsky, great knight

A comet there appeared, and when
It rays were seen by all
The cobblers in a tavern
Began a shameful brawl

He told them how the stars we see
So many, overhead
Are actually only suns
Some green, some blue, some red

And if we use the spectroscope
Their light tells, in addition
Those distant stars and our Earth
Have the same composition

He stopped. The frogs were overwhelmed.
Their froggy eyeballs rolled.
‘What more about this universe
Would you like to be told?’

‘Just one more thing, please tell us sir’
A frog asked, ‘Is it true?
Do creatures live there just like us
Do frogs exist there too?’