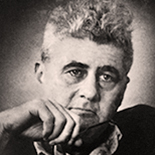 Nemerov was twice Poet Laureate Consultant in Poetry to the Library of Congress, from 1963 to 1964 and again from 1988 to 1990. For The Collected Poems of Howard Nemerov (1977), he won the National Book Award for Poetry, Pulitzer Prize for Poetry, and Bollingen Prize.

A PRIMER OF THE DAILY ROUND
Howard Nemerov

A peels an apple, while B kneels to God,
C telephones to D, who has a hand
On E’s knee, F coughs, G turns up the sod
For H’s grave, I do not understand
But J is bringing one clay pigeon down
While K brings down a nightstick on L’s head,
And M takes mustard, N drives into town,
O goes to bed with P, and Q drops dead,
R lies to S, but happens to be heard
by T, who tells U not to fire V
For having to give W the word
That X is now deceiving Y with Z,
Who happens just now to remember A
Peeling an apple somewhere far away.

Late in November, on a single night
Not even near to freezing, the ginkgo trees
That stand along the walk drop all their leaves
In one consent, and neither to rain nor to wind
But as though to time alone: the golden and green
Leaves litter the lawn today, that yesterday
Had spread aloft their fluttering fans of light.

What signal from the stars? What senses took it in?
What in those wooden motives so decided
To strike their leaves, to down their leaves,
Rebellion or surrender? and if this
Can happen thus, what race shall be exempt?
What use to learn the lessons taught by time.
If a star at any time may tell us: Now.