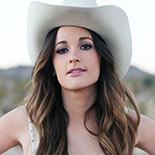 She self-released three albums before appearing on the fifth season of the USA Network’s singing competition Nashville Star in 2007, where she placed seventh. She signed to Mercury Nashville in 2012 and has released two critically acclaimed albums on the label, Same Trailer Different Park (2013) and Pageant Material (2015).