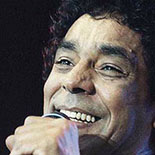 Mohamed Mounir (born October 10, 1954) is an Egyptian singer and actor, with a musical career spanning more than three decades.

Mounir incorporates various genres into his music, including classical Arabic Music, Nubian music, blues, jazz and reggae. His lyrics are noted both for their philosophical content and for their passionate social and political commentary. He is affectionately known by his fans as “The King” in reference to his album and play “El Malek Howa El Malek” (The King is The King).