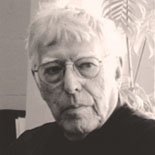 His earliest poetry was published in 1945 in Circle Magazine by George Leite. In 1949 he was one of the founders of KPFA, the first listener-supported public radio station in the United States. He continued to write poetry, but seldom sought to publish. Over the next fifty years he was active as a documentary filmmaker and public television executive, at KQED, San Francisco and KTCA, Minneapolis-Saint Paul.

Upon retirement in 2000, Moore returned full time to poetry. “Writing the Silences” edited by Brenda Hillman and Paul Ebenkamp, includes a selection of his poetry from 1946 to 2008.

ON COMING TO NOTHING
Richard Moore

Old Friends,
nearing senility,
we sit, every last prospect dim,
and think: The World was wrong about me …
but at least was right about him.

When all the other trees are bare,
Why do those last few oak leaves cling up there
under the cold blue sky?
Don’t they know when to die?

And to think: after the long freeze,
when warmth revives and fills these empty trees
with the green stuff of spring,
they’ll still be lingering,

brown, withered, and grotesquely curled,
with their dry whispers from another world.
Leaves, cling where you grew!
Maybe I’ll hang on too.