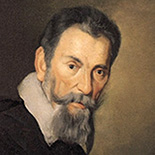 L’Orfeo, sometimes called L’Orfeo, favola in musica, is a late Renaissance/early Baroque opera by Claudio Monteverdi, with a libretto by Alessandro Striggio.

It is based on the Greek legend of Orpheus, and tells the story of his descent to Hades and his fruitless attempt to bring his dead bride Eurydice back to the living world. Written in 1607 for a court performance during the annual Carnival at Mantua, L’Orfeo is one of the earliest music dramas still regularly performed. While the honor of the first ever opera goes to Jacopo Peri’s Dafne, and the earliest surviving opera is Euridice (also by Peri), L’Orfeo has the honour of being the earliest surviving opera that is still regularly performed. 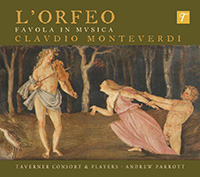 During the early 17th century, the traditional intermedio—a musical sequence between the acts of a straight play—was evolving into the form of a complete musical drama or “opera”. Monteverdi’s L’Orfeo moved this process out of its experimental era and provided the first fully developed example of the new genre. After its initial performance the work was staged again in Mantua, and possibly in other Italian centres in the next few years. Its score was published by Monteverdi in 1609 and again in 1615. After the composer’s death in 1643 the opera went unperformed for many years, and was largely forgotten until a revival of interest in the late 19th century led to a spate of modern editions and performances. At first these tended to be unstaged versions within institutes and music societies, but following the first modern dramatized performance in Paris, in 1911, the work began to be seen increasingly often in theaters. After the Second World War most new editions sought authenticity through the use of period instruments. Many recordings were issued, and the opera was increasingly staged in opera houses. In 2007 the quater-centenary of the premiere was celebrated by performances throughout the world.

In his published score Monteverdi lists around 41 instruments to be deployed, with distinct groups of instruments used to depict particular scenes and characters. Thus strings, harpsichords and recorders represent the pastoral fields of Thrace with their nymphs and shepherds, while heavy brass illustrates the underworld and its denizens. Composed at the point of transition from the Renaissance era to the Baroque, L’Orfeo employs all the resources then known within the art of music, with particularly daring use of polyphony. The work is not orchestrated as such; in the Renaissance tradition instrumentalists followed the composer’s general instructions but were given considerable freedom to improvise. This separates Monteverdi’s work from the later opera canon, and makes each performance of L’Orfeo a uniquely individual occasion.