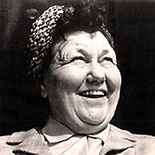 Elva Ruby Connes Miller (October 5, 1907 – July 5, 1997), who recorded under the name “Mrs. Miller”, was an American singer who gained some fame in the 1960s for her series of shrill and off-key renditions of then-popular songs such as “Moon River”, “Monday, Monday”, “A Lover’s Concerto” and “Downtown”.

Singing in an untrained, Mermanesque, vibrato-laden style, according to Irving Wallace, David Wallechinsky and Amy Wallace in The Book of Lists 2, her voice was compared to the sound of “roaches scurrying across a trash can lid.”