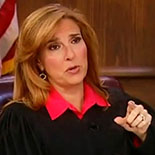 Marilyn Milian (born May 1, 1961), is a former Florida state circuit court judge who currently presides over the American television series The People’s Court.

She is the first Latina arbitrator to preside over a court show. By the end of the show’s 28th season (2012–13), Milian had completed twelve-and-a-half seasons presiding over The People’s Court, making her the longest-presiding arbitrator on the series.