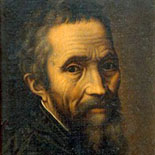 David is a masterpiece of Renaissance sculpture created between 1501 and 1504, by Italian artist Michelangelo.

It is a 17.0 ft marble statue of a standing male nude. The statue represents the Biblical hero, David, a favoured subject in the art of Florence. Originally commissioned as one of a series of statues of prophets to be positioned along the roofline of the east end of Florence Cathedral, the statue was placed instead in a public square, outside the Palazzo della Signoria, the seat of civic government in Florence, where it was unveiled on September 8, 1504.

Because of the nature of the hero it represented, the statue soon came to symbolize the defense of civil liberties embodied in the Republic of Florence, an independent city-state threatened on all sides by more powerful rival states and by the hegemony of the Medici family. The eyes of David, with a warning glare, were turned towards Rome. The statue was moved to the Galleria dell’Accademia, Florence, in 1873, and later replaced at the original location by a replica.

The pose of Michelangelo’s David is unlike that of earlier Renaissance depictions of David. The bronze statues by Donatello and Verrocchio represented the hero standing victorious over the head of Goliath, and the painter Andrea del Castagno had shown the boy in mid-swing, even as Goliath’s head rested between his feet, but no earlier Florentine artist had omitted the giant altogether. According to Helen Gardner and other scholars, David is depicted before his battle with Goliath. Instead of being shown victorious over a foe much larger than he, David looks tense and ready for combat.

The statue appears to show David after he has made the decision to fight Goliath but before the battle has actually taken place, a moment between conscious choice and action. His brow is drawn, his neck tense and the veins bulge out of his lowered right hand. The twist of his body effectively conveys to the viewer the feeling that he is in motion, an impression heightened with contrapposto. The statue is a Renaissance interpretation of a common ancient Greek theme of the standing heroic male nude. In the High Renaissance, contrapposto poses were thought of as a distinctive feature of antique sculpture. This is typified in David, as the figure stands with one leg holding its full weight and the other leg forward. This classic pose causes the figure’s hips and shoulders to rest at opposing angles, giving a slight s-curve to the entire torso. The contrapposto is emphasized by the turn of the head to the left, and by the contrasting positions of the arms.

Michelangelo’s David has become one of the most recognized works of Renaissance sculpture, a symbol of strength and youthful human beauty.

It was the colossal size of the statue that impressed Michelangelo’s contemporaries, however. Vasari described it as “certainly a miracle that of Michelangelo, to restore to life one who was dead,” and then listed all of the largest and most grand of the ancient statues that he had ever seen, concluding that Michelangelo’s work surpassed “all ancient and modern statues, whether Greek or Latin, that have ever existed.”The proportions of the David are atypical of Michelangelo’s work; the figure has an unusually large head and hands (particularly apparent in the right hand). These enlargements may be due to the fact that the statue was originally intended to be placed on the cathedral roofline, where the important parts of the sculpture may have been accentuated in order to be visible from below. The statue is unusually slender (front to back) in comparison to its height, which may be a result of the work done on the block before Michelangelo began carving it.

It is possible that the David was conceived as a political statue before Michelangelo began to work on it. Certainly David the giant-killer had long been seen as a political figure in Florence, and images of the Biblical hero already carried political implications there. Donatello’s bronze David, made for the Medici family, perhaps c. 1440, had been appropriated by the Signoria in 1494, when the Medici were exiled from Florence, and the statue was installed in the courtyard of the Palazzo della Signoria, where it stood for the Republican government of the city. By placing Michelangelo’s statue in the same general location, the Florentine authorities ensured that David would be seen as a political parallel as well as an artistic response to that earlier work.

Commentators have noted David’s uncircumcised penis, which is at odds with Judaic practice, but is consistent with the conventions of Renaissance art. 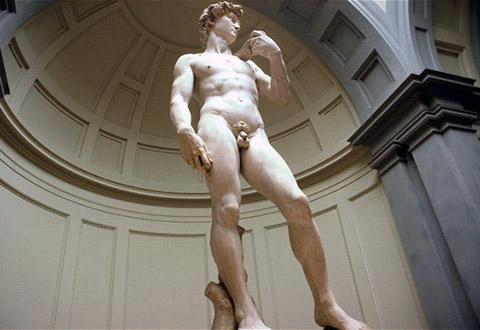 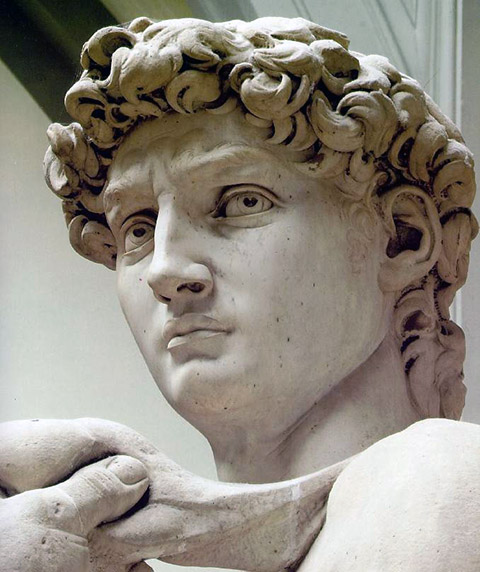 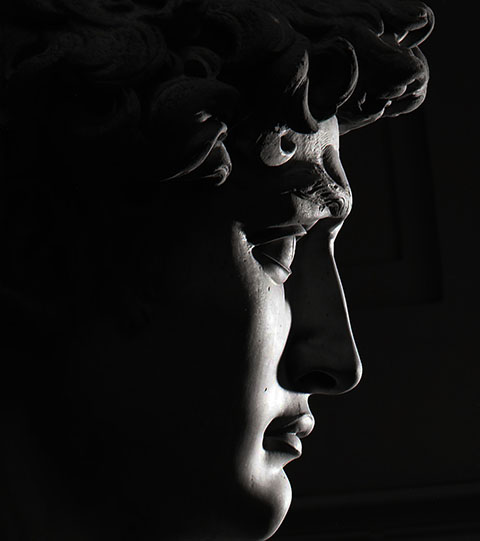 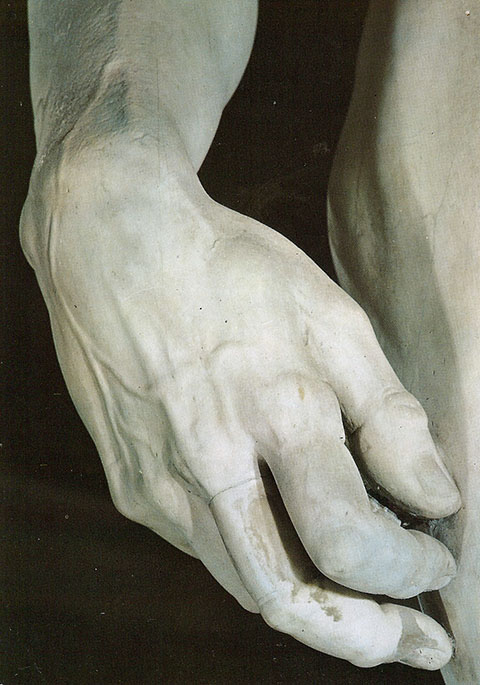