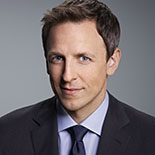 Meyers currently hosts Late Night with Seth Meyers, a late-night talk show that airs on NBC. Prior to that, he was a head writer for NBC’s Saturday Night Live and hosted its news parody segment Weekend Update.