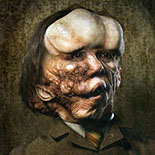 Joseph Carey Merrick (August 5, 1862 – April 11, 1890), sometimes incorrectly referred to as John Merrick, was an Englishman with severe deformities who was exhibited as a human curiosity named the Elephant Man.

Merrick became well known in London society after he went to live at the London Hospital. Merrick was born in Leicester, and began to develop abnormally during the first few years of his life. His skin appeared thick and lumpy, he developed enlarged lips, and a bony lump grew on his forehead. One of his arms and both of his feet became enlarged and at some point during his childhood he fell and damaged his hip, resulting in permanent lameness. When he was 10, his mother died, and his father soon remarried. Merrick left school at the age of 13 and had difficulty finding employment. Rejected by his father and stepmother, he left home. In late 1879, Merrick, aged 17, entered the Leicester Union Workhouse.

In 1884, after four years in the workhouse, Merrick contacted a showman named Sam Torr and proposed that Torr should exhibit him. Torr agreed and arranged for a group of men to manage Merrick, whom they named the Elephant Man. After touring the East Midlands, Merrick traveled to London to be exhibited in a penny gaff shop on Whitechapel Road which was rented by showman Tom Norman. Norman’s shop, directly across the street from the London Hospital, was visited by a surgeon named Frederick Treves, who invited Merrick to be examined and photographed. Soon after Merrick’s visits to the hospital, Tom Norman’s shop was closed by the police, and Merrick’s managers sent him to tour in Europe.

In Belgium, Merrick was robbed by his road manager and abandoned in Brussels. He eventually made his way back to London; unable to communicate, he was found by the police to have Dr. Treves’s card on him. Treves came and took Merrick back to the London Hospital. Although his condition was incurable, Merrick was allowed to stay at the hospital for the remainder of his life. Treves visited him daily, and the pair developed quite a close friendship. Merrick also received visits from the wealthy ladies and gentlemen of London society, including Alexandra, Princess of Wales.

Aged 27, Merrick died on April 11, 1890. The official cause of death was asphyxia, although Treves, who dissected the body, said that Merrick had died of a dislocated neck. He believed that Merrick—who had to sleep sitting up because of the weight of his head—had been attempting to sleep lying down, to “be like other people”.

The exact cause of Merrick’s deformities is unclear. The dominant theory throughout much of the 20th century was that Merrick suffered from neurofibromatosis type I. In 1986, a new theory emerged that he had Proteus syndrome. In 2001, it was proposed that Merrick had suffered from a combination of neurofibromatosis type I and Proteus syndrome. DNA tests conducted on his hair and bones have proven inconclusive.