During the 1925 serum run to Nome, also known as the “Great Race of Mercy”, 20 mushers and about 150 sled dogs relayed diphtheria antitoxin 674 miles (1,085 km) by dog sled across the U.S. territory of Alaska in five and a half days, saving the small city of Nome and the surrounding communities from an incipient epidemic. 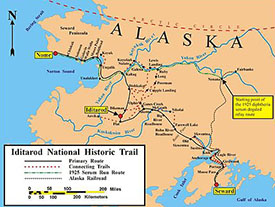 Both the mushers and their dogs were portrayed as heroes in the newly popular medium of radio, and received headline coverage in newspapers across the United States. Balto, the lead sled dog on the final stretch into Nome, became the most famous canine celebrity of the era after Rin Tin Tin, and his statue is a popular tourist attraction in New York City’s Central Park. The publicity also helped spur an inoculation campaign in the U.S. that dramatically reduced the threat of the disease.

The sled dog was the primary means of transportation and communication in subarctic communities around the world, and the race became both 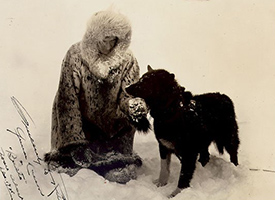 the last great hurrah and the most famous event in the history of mushing, before the first aircraft in the 1930s and then the snowmobile in the 1960s drove the dog sled almost into extinction. The resurgence of recreational mushing in Alaska since the 1970s is a direct result of the tremendous popularity of the Iditarod Trail Sled Dog Race, which honors the history of dog mushing with many traditions that commemorate the serum run.