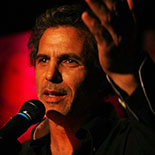 On April 4, 2011, he was assassinated by a masked gunman in the Palestinian city of Jenin, where he established The Freedom Theatre.

The Freedom Theatre is a Palestinian community-based theatre and cultural center located in the Jenin Refugee Camp in the northern part of the West Bank. Established in 2006, the theatre aims to generate cultural resistance through the fields of popular culture and art as a catalyst for social change in the occupied Palestinian territories. The theatre’s goals are to “develop a vibrant and creative artistic community [that] empowers children and young adults to express themselves freely and equally through art [while] emphasizing professionalism and innovation.” The theatre teaches courses in film, photography, creative writing, and theatre.