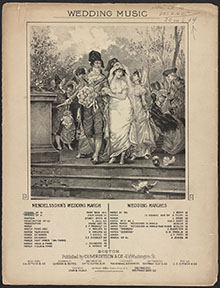 Felix Mendelssohn’s “Wedding March” in C major, written in 1842, is one of the best known of the pieces from his suite of incidental music (Op. 61) to Shakespeare’s play A Midsummer Night’s Dream. It is one of the most frequently used wedding marches, generally being played on a church pipe organ.

At weddings in many Western countries, this piece is commonly used as a recessional, though frequently stripped of its episodes in this context. It is frequently teamed with the “Bridal Chorus” from Richard Wagner’s opera Lohengrin, or with Jeremiah Clarke’s “Prince of Denmark’s March”, both of which are often played for the entry of the bride.

The first time that Mendelssohn’s “Wedding March” was used at a wedding was when Dorothy Carew wed Tom Daniel at St Peter’s Church, Tiverton, England, on June 2, 1847 when it was performed by organist Samuel Reay. However, it did not become popular at weddings until it was selected by Victoria, The Princess Royal for her marriage to Prince Frederick William of Prussia on January 25, 1858. The bride was the daughter of Queen Victoria, who loved Mendelssohn’s music and for whom Mendelssohn often played while on his visits to Britain. 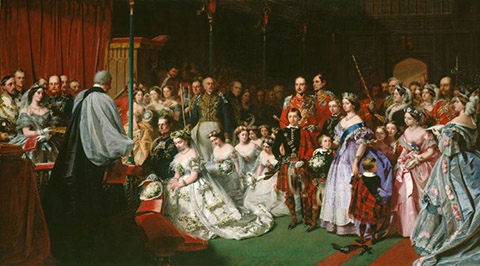 An organ on which Mendelssohn gave recitals of the “Wedding March”, among other works, is housed in St Ann’s Church in Tottenham.

Franz Liszt wrote a virtuoso transcription of the “Wedding March and Dance of the Elves” (S. 410) in 1849-50. Vladimir Horowitz transcribed the Wedding March into a virtuoso showpiece for piano and played it as an encore at his concerts.