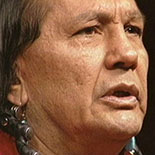 Means became a prominent member of the American Indian Movement (AIM) after joining the organization in 1968, and helped organize notable events that attracted national and international media coverage.

Means was active in international issues of indigenous peoples, including working with groups in Central and South America, and with the United Nations for recognition of their rights. He was active in politics at his native Pine Ridge Indian Reservation and at the state and national level.

Beginning an acting career in 1992, he appeared in numerous films, including The Last of the Mohicans, and released his own music CD. He published his autobiography Where White Men Fear to Tread in 1995.