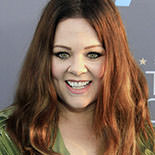 Melissa Ann McCarthy (born August 26, 1970) is an American actress, comedian, writer, fashion designer and producer. She began appearing in television and films in the late 1990s, and first gained nationwide recognition for her role as Sookie St. James on the television series Gilmore Girls (2000–2007).

From 2007 to 2009, she appeared as Dena on the ABC sitcom Samantha Who?. McCarthy was then cast as Molly Flynn on the CBS sitcom Mike & Molly (2010–2016), earning a Primetime Emmy Award for Outstanding Lead Actress in a Comedy Series as well as two other nominations during subsequent seasons. She has also been nominated five times (in 2012, 2013, 2014, 2016, and 2017) for the Primetime Emmy Award for Outstanding Guest Actress in a Comedy Series for her five appearances as host on Saturday Night Live.

McCarthy and her husband Ben Falcone founded the production company, On the Day. In 2015, she received a star on the Hollywood Walk of Fame. In 2015, she launched her clothing line, Melissa McCarthy Seven7, and told PeopleStyle that her goal was to be inclusive of all sizes and flatter all women. She launched it with sizes 4 to 24. In her first appearance on HSN, she sold more than 1,400 pairs in two hours, leading the producers to end the segment early as things started to sell out. Also in 2015, Forbes named McCarthy the third highest-paid actress in the world that year. In 2016, Forbes named her the world’s second highest-paid actress, earning $33 million.