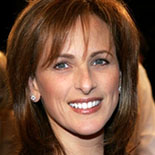 Matlin is the only deaf performer to win the Academy Award for Best Actress in a Leading Role, which she won for Children of a Lesser God. At the age of 21, she became the youngest woman in history to win that award. Her work in film and television has resulted in a Golden Globe award, with two additional nominations, and four Emmy nominations. Deaf since she was 18 months old, she is also a prominent member of the National Association of the Deaf.