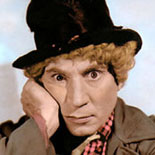 In contrast to the mainly-verbal comedy of his brothers Groucho and Chico, Harpo’s comic style was exclusively visual, being an example of both clown and pantomime traditions. He wore a curly reddish blonde wig, and never spoke during performances (he blew a horn or whistled to communicate).