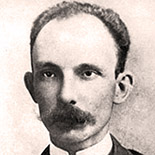 In his short life he was a poet, an essayist, a journalist, a revolutionary philosopher, a translator, a professor, a publisher, and a political theorist. He was also a part of the Cuban Freemasons. Through his writings and political activity, he became a symbol for Cuba’s bid for independence against Spain in the 19th century, and is referred to as the “Apostle of Cuban Independence” He also wrote about the threat of United States expansionism into Cuba. From adolescence, he dedicated his life to the promotion of liberty, political independence for Cuba, and intellectual independence for all Spanish Americans; his death was used as a cry for Cuban independence from Spain by both the Cuban revolutionaries and those Cubans previously reluctant to start a revolt.

The concepts of freedom, liberty, and democracy are prominent themes in all of his works, which were influential on the Nicaraguan poet, Rubén Darío and the Chilean poet, Gabriela Mistral.

I WISH TO LEAVE THE WORLDJose Marti

I wish to leave the world
By its natural door;
In my tomb of green leaves
They are to carry me to die.
Do not put me in the dark
To die like a traitor;
I am good, and like a good thing
I will die with my face to the sun.

A SINCERE MAN AM I (Verse 1)Jose Marti
From the land where palm trees grow,
And I want before I die
My soul’s verses to bestow.I’m a traveller to all parts,
And a newcomer to none:
I am art among the arts,
With the mountains I am one.I know how to name and class
All the strange flowers that grow;
I know every blade of grass,
Fatal lie and sublime woe.I have seen through dead of night
Upon my head softly fall,
Rays formed of the purest light
From beauty celestial.I have seen wings that were surging
From beautiful women’s shoulders,
And seen butterflies emerging
From the refuse heap that moulders.I have known a man to live
With a dagger at his side,
And never once the name give
Of she by whose hand he died.Twice, for an instant, did I
My soul’s reflection espy:
Twice: when my poor father died
And when she bade me good-bye.I trembled once, when I flung
The vineyard gate, and to my dread,
The wicked hornet had stung
My little girl on the forehead.I rejoiced once and felt lucky
The day that my jailer came
To read the death warrant to me
That bore his tears and my name.

I hear a sigh across the earth,
I hear a sigh over the deep:
It is no sign reaching my hearth,
But my son waking from sleep.

If they say I have obtained
The pick of the jeweller’s trove,
A good friend is what I’ve gained
And I have put aside love.

I have seen across the skies
A wounded eagle still flying;
I know the cubby where lies
The snake of its venom dying.

I know that the world is weak
And must soon fall to the ground,
Then the gentle brook will speak
Above the quiet profound.

While trembling with joy and dread,
I have touched with hand so bold
A once-bright star that fell dead
From heaven at my threshold.

On my brave heart is engraved
The sorrow hidden from all eyes:
The son of a land enslaved,
Lives for it, suffers and dies.

All is beautiful and right,
All is as music and reason;
And all, like diamonds, is light
That was coal before its season.

I know when fools are laid to rest
Honor and tears will abound,
And that of all fruits, the best
Is left to rot in holy ground.

Without a word, the pompous muse
I’ve set aside, and understood:
From a withered branch, I choose
To hang my doctoral hood.