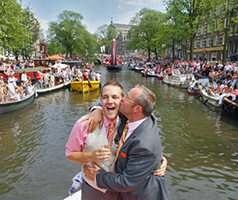 The marriage bill passed the House of Representatives by 109 votes to 33. The Senate approved the bill on 19 December 2000 by 49 to 26 votes. Only the Christian parties, which held 26 of the 75 seats at the time, voted against the bill. Although the Christian Democratic Appeal would form the next government, they did not indicate any intention to repeal the law.