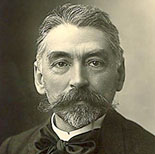 He was a major French symbolist poet, and his work anticipated and inspired several revolutionary artistic schools of the early 20th century, such as Cubism, Futurism, Dadaism, and Surrealism.

Coldplay alludes to his final poem in their song, Vida la Vida. The second verse: I used to roll the dice – Feel the fear in my enemy’s eyes – Listen as the crowd would sing – ‘Now the old king is dead! Long live the king!’ The Viva la Vida album art confirms the subject, featuring a reproduction of Liberty Leading the People by Eugène Delacroix, which commemorates the July Revolution of 1830.

Mallarmé is referred to extensively in the latter section of Joris-Karl Huysmans’ À rebours, where Des Esseintes describes his fervour-infused enthusiasm for the poet: “These were Mallarmé’s masterpieces and also ranked among the masterpieces of prose poetry, for they combined a style so magnificently that in itself it was as soothing as a melancholy incantation, an intoxicating melody, with irresistibly suggestive thoughts, the soul-throbs of a sensitive artist whose quivering nerves vibrate with an intensity that fills you with a painful ecstasy.” [p. 198, Robert Baldick translation]

The critic and translator Barbara Johnson has emphasized Mallarmé’s influence on twentieth-century French criticism and theory: “It was largely by learning the lesson of Mallarmé that critics like Roland Barthes came to speak of ‘the death of the author’ in the making of literature. Rather than seeing the text as the emanation of an individual author’s intentions, structuralists and deconstructors followed the paths and patterns of the linguistic signifier, paying new attention to syntax, spacing, intertextuality, sound, semantics, etymology, and even individual letters. The theoretical styles of Jacques Derrida, Julia Kristeva, Maurice Blanchot, and especially Jacques Lacan also owe a great deal to Mallarmé’s ‘critical poem.'”

From golden showers of the ancient skies,
On the first day, and the eternal snow of stars,
You once unfastened giant calyxes
For the young earth still innocent of scars:

Young gladioli with the necks of swans,
Laurels divine, of exiled souls the dream,
Vermilion as the modesty of dawns
Trod by the footsteps of the seraphim;

The hyacinth, the myrtle gleaming bright,
And, like the flesh of woman, the cruel rose,
Hérodiade blooming in the garden light,
She that from wild and radiant blood arose!

And made the sobbing whiteness of the lily
That skims a sea of sighs, and as it wends
Through the blue incense of horizons, palely
Toward the weeping moon in dreams ascends!

Hosanna on the lute and in the censers,
Lady, and of our purgatorial groves!
Through heavenly evenings let the echoes answer,
Sparkling haloes, glances of rapturous love!

Mother, who in your strong and righteous bosom,
Formed calyxes balancing the future flask,
Capacious flowers with the deadly balsam
For the weary poet withering on the husk.

GIFT OF THE POEM
Stéphane Mallarmé

I bring you the child of an Idumaean night,
Black, and with featherless wings bled white:
Through the windows burnished with incense and gold,
The rimed panes mournful, alas, from the cold,
The Dawn spread her fingers upon the angelic
Lamp, and when she had offered this relic
To the father smiling in spite of his qualms,
The sterile, blue silence was wafted by palms!
O mother cradling your infant daughter,
Welcome the birth of this untimely monster!
And with your voice like viol and harpsichord, O singer,
Will you press upon your breast a faded finger,
Through which in sibylline whiteness woman flows
For lips starved from the air the virginal azure blows?