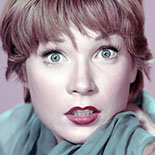 MacLaine has won an Academy Award, five Golden Globe Awards, including the Cecil B. DeMille Award, an Emmy Award and two BAFTA Awards.

In 2012, MacLaine received the 40th AFI Life Achievement Award from the American Film Institute, and in 2013 received the Kennedy Center Honors for her lifetime contributions to American culture through the performing arts. MacLaine is known for her New Age beliefs, and has an interest in spirituality and reincarnation. MacLaine has written a series of autobiographical works that reveal her spiritual beliefs, document her world travels, and describe her Hollywood career.