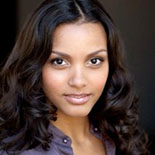 Jessica Lucas (born September 24, 1985) is a Canadian actress and singer. She is known for her roles in television, such as Melrose Place, Edgemont and Cult, and in the films She’s the Man, Cloverfield and Evil Dead. She also starred in the music video for Coldplay’s 2014 single “True Love”.