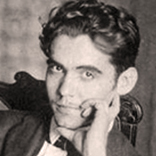 García Lorca achieved international recognition as an emblematic member of the Generation of ’27, a group consisting of mostly poets who introduced the tenets of European movements (such as symbolism, futurism, and surrealism) into Spanish literature.

He was executed by Nationalist forces at the beginning of the Spanish Civil War. His body has never been found. In 2008, a Spanish judge opened an investigation into Lorca’s death. The García Lorca family eventually dropped objections to the excavation of a potential gravesite near Alfacar, but no human remains were found.

Dawn in New York has
four columns of mire
and a hurricane of black pigeons
splashing in the putrid waters.

Dawn in New York groans
on enormous fire escapes
searching between the angles
for spikenards of drafted anguish.

Dawn arrives and no one receives it in his mouth
because morning and hope are impossible there:
sometimes the furious swarming coins
penetrate like drills and devour abandoned children.

Those who go out early know in their bones
there will be no paradise or loves that bloom and die:
they know they will be mired in numbers and laws,
in mindless games, in fruitless labors.

The light is buried under chains and noises
in the impudent challenge of rootless science.
And crowds stagger sleeplessly through the boroughs
as if they had just escaped a shipwreck of blood.

Green, how I want you green.
Big hoarfrost stars
come with the fish of shadow
that opens the road of dawn.
The fig tree rubs its wind
with the sandpaper of its branches,
and the forest, cunning cat,
bristles its brittle fibers.
But who will come? And from where?
She is still on her balcony
green flesh, her hair green,
dreaming in the bitter sea.