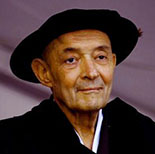 John Daido Loori (June 14, 1931 – October 9, 2009) was a Zen Buddhist rōshi who served as the abbot of Zen Mountain Monastery and was the founder of the Mountains and Rivers Order and CEO of Dharma Communications.

Daido Loori received shiho (dharma transmission) from Taizan Maezumi in 1986 and also received a Dendo Kyoshi certificate formally from the Soto school of Japan in 1994. In 1997, he received dharma transmission in the Harada-Yasutani and Inzan lineages of Rinzai Zen as well. In 1996 he gave dharma transmission to his student Bonnie Myotai Treace, in 1997 to Geoffrey Shugen Arnold, and in 2009 to Konrad Ryushin Marchaj. In addition to his role as a Zen Buddhist priest, Loori was an exhibited photographer and author of more than twenty books.