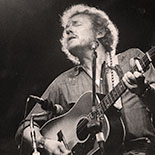 Gordon Meredith Lightfoot, Jr. (born November 17, 1938) is a Canadian singer-songwriter who achieved international success in folk, folk-rock, and country music, and has been credited for helping define the folk-pop sound of the 1960s and 1970s. He has been referred to as Canada’s greatest songwriter and internationally as a folk-rock legend.