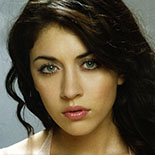 Originally classically trained, she rose to fame after winning the second season of the French television reality show, Star Academy, in 2002. She has since recorded five studio albums and scored two number one singles, “Cassé” and “Nolwenn Ohwo!”, on the French charts. In 2012, her album, Bretonne, was certified two times diamond for sales exceeding one million copies.

Leroy has received numerous awards and nominations. In December 2013, she was ranked 19th on Le Journal du Dimanche’s 50 Most Loved Celebrities in France, making her the top female singer on the list.