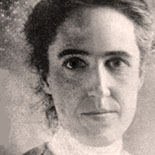 A graduate of Radcliffe College, Leavitt started working at the Harvard College Observatory as a “computer” in 1893, examining photographic plates in order to measure and catalog the brightness of stars. Leavitt discovered the relation between the luminosity and the period of Cepheid variable stars. Though she received little recognition in her lifetime, it was her discovery that first allowed astronomers to measure the distance between the Earth and faraway galaxies. After Leavitt’s death, Edwin Hubble used the luminosity-period relation for Cepheids to determine that the Milky Way is not the only galaxy in the observable universe, and that the universe is expanding (see Hubble’s law).

The period-luminosity relationship for Cepheids made them the first “standard candle” in astronomy, allowing scientists to compute the distances to galaxies too remote for stellar parallax observations to be useful. One year after Leavitt reported her results, Ejnar Hertzsprung determined the distance of several Cepheids in the Milky Way, and with this calibration the distance to any Cepheid could be accurately determined.

Cepheids were soon detected in other galaxies, such as Andromeda (notably by Edwin Hubble in 1923–24), and they became an important part of the evidence that “spiral nebulae” are actually independent galaxies located far outside of our own Milky Way. Thus, Leavitt’s discovery would forever change our picture of the universe, as it prompted Harlow Shapley to move our Sun from the center of the galaxy in the “Great Debate” and Edwin Hubble to move our galaxy from the center of the universe.

The accomplishments of the American astronomer Edwin Hubble, who established that the Universe is expanding, were also made possible by Leavitt’s groundbreaking research. “If Henrietta Leavitt had provided the key to determine the size of the cosmos, then it was Edwin Powell Hubble who inserted it in the lock and provided the observations that allowed it to be turned,” wrote David H. and Matthew D.H. Clark in their book Measuring the Cosmos. To his credit, Hubble himself often said that Leavitt deserved the Nobel Prize for her work. Gösta Mittag-Leffler of the Swedish Academy of Sciences tried to nominate her for that prize in 1924, only to learn that she had died of cancer three years earlier (The Nobel Prize is not awarded posthumously).