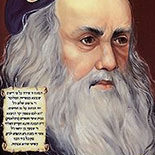 Shimon Lavi (also Shimon ibn Lavi, anglicized as Simeon Labi, 1486–1585) was a Sephardi Hakham, kabbalist, physician, astronomer, and poet. He is credited with the founding of religious institutions and the revival of Torah study in Tripoli, Libya, in the mid-sixteenth century, where he served as spiritual leader and dayan (rabbinical court judge) for more than three decades.

Shimon Lavi authored a commentary on the Zohar titled Ketem Paz and the piyyut, “Bar Yochai“, a kabbalistic hymn which became widely popular in the Jewish world. Libyan Jews consider him their greatest scholar.