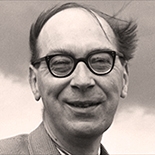 Philip Arthur Larkin, (August 9, 1922 – December 2, 1985) is widely regarded as one of the greatest English poets of the latter half of the twentieth century.

After graduating from Oxford in 1943 with a first in English language and literature, Larkin became a librarian. It was during the thirty years he served as University Librarian at the Brynmor Jones Library at the University of Hull that he produced the greater part of his published work.

Eric Homberger called him “the saddest heart in the post-war supermarket”—Larkin himself said that deprivation for him was what daffodils were for Wordsworth. Larkin’s public persona was that of the no-nonsense, solitary Englishman who disliked fame and had no patience for the trappings of the public literary life.

I work all day, and get half-drunk at night.
Waking at four to soundless dark, I stare.
In time the curtain-edges will grow light.
Till then I see what’s really always there:
Unresting death, a whole day nearer now,
Making all thought impossible but how
And where and when I shall myself die.
Arid interrogation: yet the dread
Of dying, and being dead,
Flashes afresh to hold and horrify.
The mind blanks at the glare. Not in remorse
—The good not done, the love not given, time
Torn off unused – nor wretchedly because
An only life can take so long to climb
Clear of its wrong beginnings, and may never;
But at the total emptiness for ever,
The sure extinction that we travel to
And shall be lost in always. Not to be here,
Not to be anywhere,
And soon; nothing more terrible, nothing more true.

This is a special way of being afraid
No trick dispels. Religion used to try,
That vast, moth-eaten musical brocade
Created to pretend we never die,
And specious stuff that says No rational being
Can fear a thing it will not feel, not seeing
That this is what we fear—no sight, no sound,
No touch or taste or smell, nothing to think with,
Nothing to love or link with,
The anesthetic from which none come round.

And so it stays just on the edge of vision,
A small, unfocused blur, a standing chill
That slows each impulse down to indecision.
Most things may never happen: this one will,
And realization of it rages out
In furnace-fear when we are caught without
People or drink. Courage is no good:
It means not scaring others. Being brave
Lets no one off the grave.
Death is no different whined at than withstood.

Slowly light strengthens, and the room takes shape.
It stands plain as a wardrobe, what we know,
Have always known, know that we can’t escape,
Yet can’t accept. One side will have to go.
Meanwhile telephones crouch, getting ready to ring
In locked-up offices, and all the uncaring
Intricate rented world begins to rouse.
The sky is white as clay, with no sun.
Work has to be done.
Postmen like doctors go from house to house.

DAYBREAK AND A CANDLE-ENDPhilip Larkin

All men live in suffering,
I know as few can know,
Whether they take the upper road
Or stay content on the low,
Rower bent in his row-boat
Or weaver bent at his loom,
Horseman erect upon horseback
Or child hid in the womb.