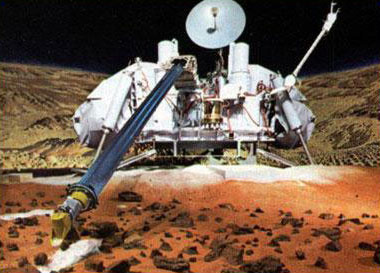 Viking 1 was the first of two spacecraft (along with Viking 2) sent to Mars as part of NASA’s Viking program. It was the first spacecraft to successfully land on Mars and perform its mission, and held the record for the longest Mars surface mission of 2307 days or 2245 sols (from landing until surface mission termination, Earth time) until that record was broken by the Opportunity Rover on May 19, 2010.

Following launch using a Titan/Centaur launch vehicle on August 20, 1975 and a 10-month cruise to Mars, the orbiter began returning global images of Mars about 5 days before orbit insertion. The Viking 1 Orbiter was inserted into Mars orbit on June 19, 1976 and trimmed to a 1513 x 33,000 km, 24.66 h site certification orbit on June 21. Landing on Mars was planned for July 4, 1976, the United States Bicentennial, but imaging of the primary landing site showed it was too rough for a safe landing. The landing was delayed until a safer site was found. The lander separated from the orbiter on July 20 08:51 UTC and landed at 11:53:06 UTC. It was the first attempt by the United States at landing on Mars.

The lander and its aeroshell separated from the orbiter on July 20 08:51 UTC. At the time of separation, the lander was orbiting at about 4 km/s. The aeroshell’s retrorockets fired to begin the lander deorbit maneuver. After a few hours at about 300 km altitude, the lander was reoriented for atmospheric entry. The aeroshell with its ablative heat shield slowed the craft as it plunged through the atmosphere. During this time, entry science experiments were performed by using a retarding potential analyzer, a mass spectrometer, and pressure, temperature and density sensors. At 6 km altitude, traveling at about 250 m/s, the 16 m diameter lander parachutes deployed. Seven seconds later the aeroshell was jettisoned, and 8 seconds after that the three lander legs were extended. In 45 seconds the parachute had slowed the lander to 60 m/s. At 1.5 km altitude, retrorockets on the lander itself were ignited and, 40 seconds later at about 2.4 m/s, the lander arrived on Mars with a relatively light jolt. The legs had honeycomb aluminum shock absorbers to soften the landing.