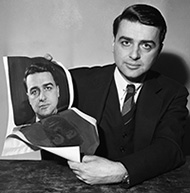 Edwin Herbert Land (May 7, 1909 – March 1, 1991), was an American scientist and inventor, best known as the co-founder of the Polaroid Corporation.

Among other things, he invented inexpensive filters for polarizing light, a practical system of in-camera instant photography, and his retinex theory of color vision. His Polaroid instant camera, which went on sale in late 1948, made it possible for a picture to be taken and developed in 60 seconds or less.

Land Cameras are instant cameras with self-developing film named after their inventor, Edwin Land, while working for Research Row in Boston, Massachusetts and manufactured by Polaroid between the years of 1947 and 1983. Though Polaroid continued producing instant cameras after 1983, the name ‘Land’ was dropped from the camera name since Edwin Land retired in 1982. The first commercially available model was the Polaroid Land Camera Model 95, which produced prints in about 1 minute,and was first sold to the public in November, 1948.